Joham is known for her photo-realistic - partly surrealistic - as well as expressive paintings. At the latest after the large retrospective at the Landesgalerie Niederösterreich, the artist achieved her long overdue public breakthrough. Born in Styria, she was a student of Edaurd Bäumer at the University of Applied Arts in Vienna. The present work is a commission from the 1980s, the counterpart of which is in the Centre Pompidou in Paris. In the oil painting, the artist drew primarily on the colours red and blue. There are six riders in the painting, some of whom can only be made out on closer inspection, possibly in a race against each other. The background gives the painting an industrial character. The play between the industrial and natural habitat is taken up again here - as in many of Joham's paintings. The blue border, which the artist achieved with a kind of glaze, gives the exhibit a frame character, which is broken through by some of the riders, making the picture seem almost three-dimensional. Provenance: Private collection Vienna

back to the catalog view
<< voriges Objekt
nächstes Objekt >>

Select below your desired detail view. With a click on your selection, this picture is enlarged. 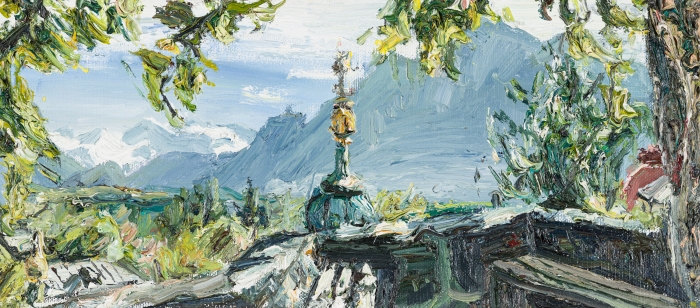